Get Started 1 - Draw on a console

Welcome to the start of the Getting Started with SadConsole tutorial series. This series will outline how to use the basic parts of SadConsole from the perspective of a new developer.

To start this tutorial you'll need to have created a SadConsole project. It is recommended that you use the SadConsole templates for .NET Core which works for Windows, Linux, and macOS.

Alternatively, you can create a project with Visual Studio and .NET Framework.

Because of the added complexity, I do not recommend that you create a MonoGame project using the MonoGame Visual Studio templates.

Sync your code to mine

The previous section leads you to material that helps you create a SadConsole project. To ensure that we start off with the same material, make your program.cs file look like the following:

You should be able to run this code and see the following output: 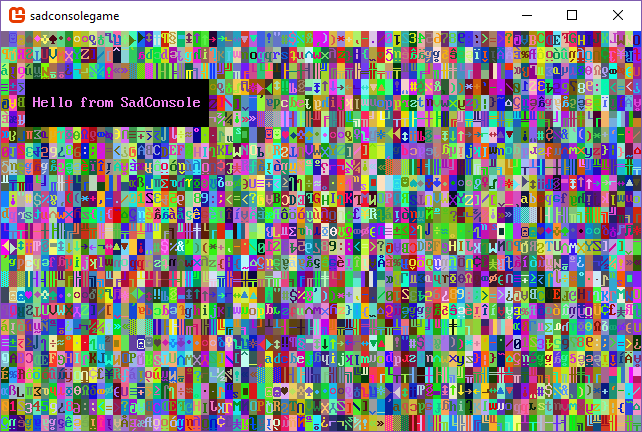 The static void Init() method created in the previous section provides a simple place to easily explore and play with SadConsole without creating any real game code. The Init method is declared as static which means that you don't have to create an object to access this method. This method was passed to SadConsole in the code at the start of the program. This is a hook where you can provide some extra initialization code for your game, such as creating all the startup variables and objects.

At the very top of the program are using statements which imports common SadConsole types into your programming space. Don't worry about those for now, but think of it like this. Just like how a house is located at an address in a neighborhood, so too are types. SadConsole types have an "address" that identify where they are located. One common one is SadConsole.Console. We're importing that directly so we only have to refer to it as Console.

Before we start this part of the tutorial, lets reset our code to a basic random console.

If you run it, you see the basic random console but it's missing the black box that says "Hello from SadConsole."

You can attach consoles to other consoles, creating a child-parent relationship between them. When a console with children (the parent) is repositioned, all child consoles move along with it.

Replace the Init code with the following:

If you notice the last line, the console variable (the one with all the random colors) is still assigned as the current screen. However, the lines above it have created a second console and attached it to the first console. Let's look at that code line by line.

When you run this code, you'll see a different result.

Since the child console is attached to the parent, you can interact with it individually. For example, try running your game again, but change some stuff such as the position, visibility, and even change the position of the parent to see how it affects the child. Try one of the following lines of code.

Now that you've seen how the parent-child relationship works with consoles, let's explore a little more about how to change the console, like we did with printing.

First, let's start with some clean code. Replace the Init method with the following:

You now have a blank console, which really, you won't be able to tell that it exists because it just looks like a black background. Try each of the following lines of code. Paste each line below the // New code starts here code comment. You can try and run your game with each line individually to see the result.

You've now explored some of the basics of SadConsole. Keep playing around with these commands. The next part of this series will explore keyboard and mouse input.