How to draw on a Console

Each console provides methods to change cell colors, glyphs, print text, draw boxes, and other types of drawing. This article shows you different ways to interact with the cells of a console.

The SadConsole.Console is broken up into multiple cells, all arranged in a grid. Each cell can change its foreground and background color and the character glyph it is currently showing.

You can set or get the background color of a cell by using its x,y coordinates and the SetBackground or GetBackground method.

.NET easiy converts between the char type and the int type.

Set a character along with a foreground color

Set a character with fore/back color

Setting the glyph cell-by-cell is not very efficient when you have a string you want to print. The console provides a way to print an entire string.

Additionally, you can read the characters back from a console into a string. This uses an x,y location for the start of the string, and then the length of the string to read. For example, the previous code example printed a string at 2,0 that was 39 characters long, to read that string back out of the console and into a variable, you would use:

Using the Print statement on a console will parse each character in the string, as it is, and print it on the surface. That means that if your string has control characters, such as a new line command \r\n, these characters will also be printed. The console has a Cursor property that helps with this. By using Console.Cursor.Print, SadConsole parses your string and respects control codes. It also breaks up words so that they don't split across lines.

Here is an example of printing with and without the cursor. The console used here is 80x25 in size. 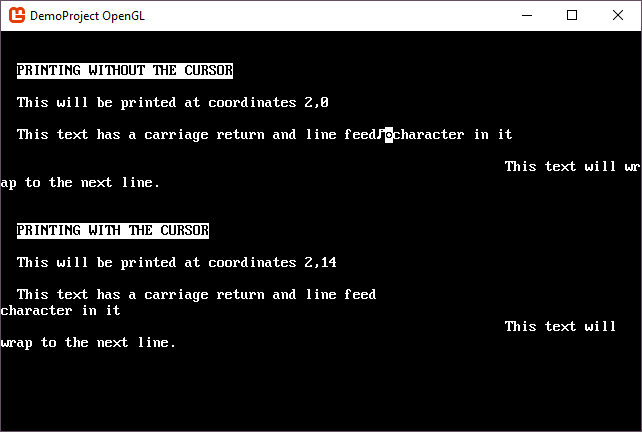